skip to main | skip to sidebar

I have just posted a video snippet of my lathe in action at an event earlier this year.

I have other video of the lathe being used, but this is a bit more of general interest, perhaps.

If you haven't already read it, there are words and pictures about its construction in some earlier posts, starting with this one.
Posted by Scott at 1:34 AM No comments:

Cheeses on a plate

While I was building the bells for the next two shawms, I had an interruption.  Two friends had been getting around as a couple for a few years and decided to make it official and get married.  All well and good, so far.  However, they wanted something different for their wedding reception.

Lindsay sent me an URL and asked "Could you make something like this, for our reception?".  "Something like this" was a tier of platters 3 or 4 levels high, supporting a range of cheeses and other goodies.  I had not done anything like that before, but technically, there did not seem to be any obstacles, so I said "Yes".


My thought was to find some suitable wood through my local network of contacts, and from this, cut sections of trunk or branch to form the platters.  I was not sure about the strength of the thin slabs and whether these would manage the stresses.  However, if this proved to be a problem I could always use a reinforcing layer of plywood out of sight underneath to hold things together.

So, to find some wood.  My initial enquiries did not turn up anything - this was July (local midwinter) and the wedding was in October. I was starting to think of a backup plan of creating a composite from smaller wood, but this would not have a external bark layer, which had a nice visual effect.

And then, the breakthrough: a colleague asked me if I would be interested in a plum tree that he wanted felled.  Definitely. Some short while later, after some chainsaw work, I had a 400mm trunk section and plenty of 150-200mm limbs.

By now it was August, and the wood was green.  How to dry it as quickly as possible without ruining it? I cut about twice as many slabs as I expected to need (allowing for spoilage), and stacked these with folded newspapers between them in a mild dry place.

For the next three weeks, I cycled the newspaper layers with dry replacements every day and progressively wicked the moisture out.  Stacking the slabs may also have helped reduce buckling (I think).  No photos of this, sorry.  My attention was elsewhere at the time.

It was very obvious after the first week that the slabs were going to split as they dried.  I made the best of this by making starter cuts to encourage the splitting to happen where it was manageable.

Once the slabs were dry enough to usefully work, before anything else, I had to deal with the splits. I chose four slabs to be the mainstay pieces, and used a fine saw and wide chisel to clean up the splits to be pretty straight.  This left open segments of 30-50 degrees arc. From the unused slabs, I cut segments to match the gaps.  However, thinking the matter through, I could see that cutting segments that would fit closely into the gaps left by splitting was not going to be practical. 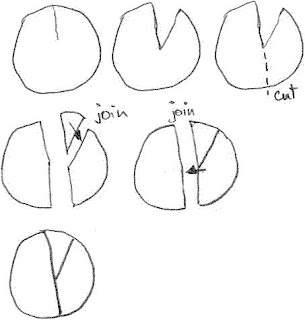 This sketch shows the sequence I used to add a wedge segment into a split slab.

The virtue of this method is that, at every stage of the jointing, both ends of each join are accessible, and each join is an essentially straight cut, which means that it can be dressed by running a saw between the joint faces a few times, and cleaning up with a wide chisel before the glue goes in. 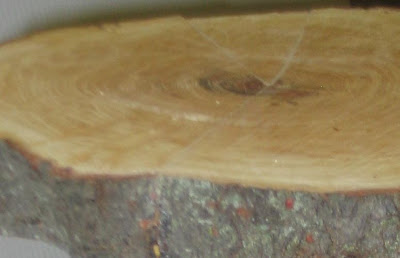 In this close up, you can see the three way join on the far side of this slab.  Using Gorilla Glue, which is both strong and somewhat space filling, the final joint looks pretty tidy when dressed up.  Since the donor slab for the inserted segment is from an adjacent slice from the branch, the rings and bark could be arranged to be very similar to the host piece. 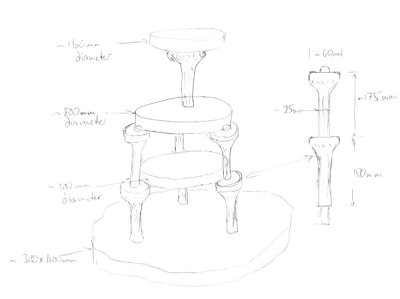 Here is my intended final arrangement.  I had the platters pretty much sorted out, but had nothing done for the upright pillars. Consulting my stock of wood, I found a piece of birch which had been windfall in a local city park a year or so earlier, which could be made to yield blanks for two of the pillars, but not enough for the third pillar as a single piece. 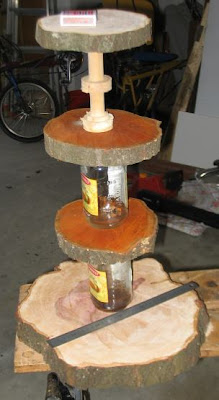 Here are the slabs doing a bit of a photo-opportunity, with jars and whatever to get roughly the desired spacing.

Interesting to note the difference in the colour of the slabs.  The cut slabs quickly turned this deep apricot colour as they dried, but the inner wood shows up really pale once it is dressed flat again. I guess that this is oxidised starch or something similar. 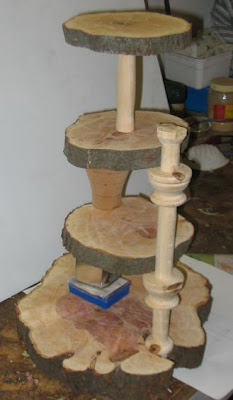 The first two pillars turned up easily enough, although this piece of wood didn't seem to be the best of the bunch - the grain was not as close as other parts from the same tree.  Also, possibly not helped by me being in a little bit of a rush, since the handover date was starting to loom disturbingly close.

Here are the dressed slabs doing a trial fit with the first pillar.  The central pillar supporting the top slab is also there, slimmer than I had first thought would be necessary.  You might recognise the temporary spacer in the middle background as one of the bell sections for the shawms, described in other postings

There wasn't enough good wood to make the third pillar in one piece. In the end, I made it in three parts: lower half, top stem and top rest.  The assembled pillar was not quite as true as the others, but looked perfectly good enough in the final assembly.


Putting some coats of shellac on them certainly diverted attention from any vagaries of manufacture.

I finally had the slabs to a state that was close enough to ready for varnishing.  I did not want to use a modern polyurethane since it would not have time to cure enough to be sure that it would not taint the food on the platters.  Also, I rather liked the look and feel of the shellac I had been using for other work, and I knew that it was tasteless and very food safe.

A good choice, as it turned out.  After a generous coating on the bark sections, these were transformed from rough dull finish to a subtly gleaming shiny finish that looked very good.  After that, it was almost an anticlimax to varnish the dressed sections of wood, but the pale faces of plum became rich golden coloured surfaces. 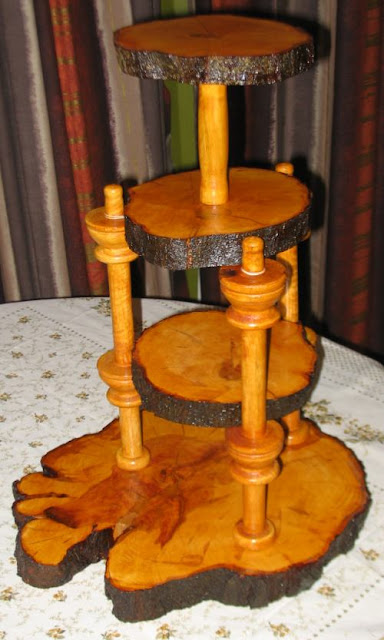 And here is the final assembly, just prior to be taken apart for delivery. 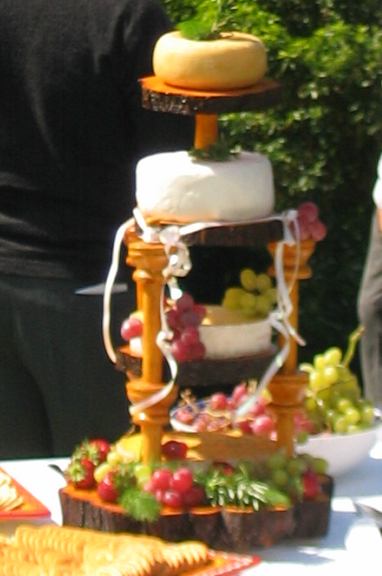 So to the day of the wedding.  It was at a picturesque small church on Banks peninsula, with views looking out East over the Pacific Ocean.  The weather was brilliant, and the site was beautifully sheltered from any wind of consequence.

Here is the platter set, loaded and ready for action.

This was an interesting enough project, but doing it again would be less inspiring, since the element of surprise would not be there.
Posted by Scott at 1:20 AM No comments: